We are very happy to announce the Casa Matria residency project by VILJA LARJOSTO (University of Helsinki) / estamos felizes de apresentar o projeto de residencia scientifica de Vilja Larjosto::
URBAN HORTICULTURE IN VILA BRANDÃO / HORTICULTURA URBANA NA VILA BRANDÃO
" The proposal is based on my master’s thesis (1/2009) in landscape architecture, an urban agriculture plan for Vila Brandão’s immediate surroundings. The aim of the residency is to start a long-term social & ecological project in the community to strengthen its position.
During the residency a kitchen garden for Casa Matria will be designed and realized. Opportunities for expanding the horticulture project in Vila Brandão will be studied. Partnership(s) with local university, ONGs and other partners will be sought. The proposal will be presented to local municipal authorities. 1-3 garden workshops with different themes will be held with the residents of the community." 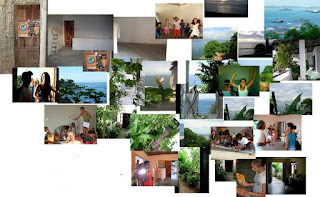 our manifesto – our credo
Casa Mátria is an open, socio-cultural center, based on gender-, race and social justice, full respect of diversity, dedication to our environment, visionary culture & arts, politics & economics.
Social peace, ecology and sustainable development are our main objectives. Casa Mátria is all about social responsibility and cultural freedom.
Casa Mátria is open to organizations or individuals who want to join forces in that cause.
get our feed to be informed about the new residency programs starting in february 2010 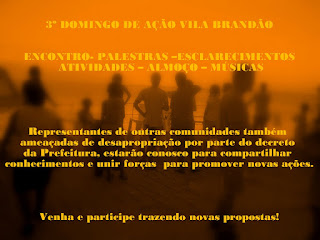 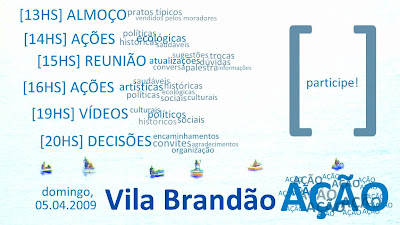 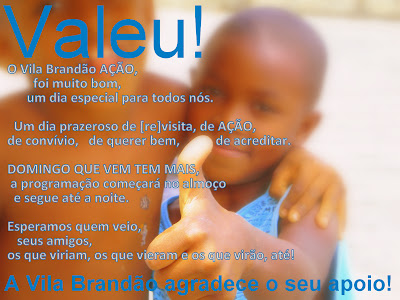 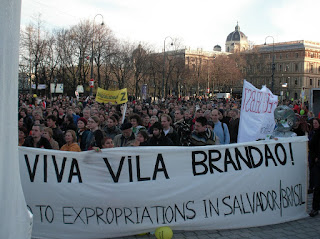 Horst Watzl: Instead of being proud of people like Paulo Freire its a shame how authorities still behave ignoring principal basic rights of people for the sake of profit. profit for whom??? all the best to the people of vila brandao much power in resistance!
post by silvia jura Um comentário:

Resistance in the heart of Salvador

Vila Brandão is a peaceful - 200 families - community, having conquered a very special place in the heart of Salvador, with a gorgeous view over La Bahia de Todos os Santos.
But having a serious problem since march 20th, 2009 - a decree of total expropriation has been emitted by the city council!

A little history…
The first residents came in the 1940’s and stayed. They started building simple clay-houses on the inaccessible hillside, making a living from casual labor, gardening and fishing.
Seu Antonio, Pae de Santo, is considered the founder of Vila Brandão – he just died in 2007, at the age of 103 years.

Nowadays, life in Vila Brandão is very quiet, the residents have different backgrounds – many are Brandão-born or living here since childhood, some came from the interior, some are artists, working class people, strangers, teachers… They are open to guests, a place of hospitality. The houses are nice, clean, connected to the water and electricity-nets of town. People are paying local ground taxes.
And for the rest – they are absolutely self-organized - no help from the city.
No streets, nearly no public illumination, no cleaning. No kindergarden. No health-station. No social project. No cultural point.
Roberval, Edson and Sergipe take care of the sea, they’re fishermen with small wooden, handmade boats, Dora and Alex are experts in local plants and little Allison already knows all about bird-breeding… Dona Raimunda organized the administration of the community for many years.
The residents are taking care of the nature, providing the neighbourhood free and safe access to a small beach!
And the women – Patricia, Petruska, Ana Pi, Laura, Alda – they are leading the movement against expropriation!
All is self-organized. And, by the way, Vila Brandão has the lowest criminality rate of Salvador!

Quilombo means resistance
You won’t believe that life is paradise - Vila Brandão is always involved in some kind of a fight...
The city of Salvador doesn’t support the community – so every day life is very complicated. But there are continuously problems with the yacht club, which invades the public land, which the community takes care of step by step.
Highlights in the last years fights were:
• fishermen had to fight for free access to the sea – the adversary is the yachtclub;
• residents fight for a children’s park: neither the city, nor the yachtclub, nor the upper class neighbours help. On the contrary: the yachtclub destroys the small park!
• the most expensive real estate in town - casa wildenberg – is direct neighbour: big discussions between investors, authorities, priests and politicians, using the residents of vila brandão as „the social argument“!

And now, Vila Brandão is in danger of expropriation!
João Henrique, the major of Salvador, has a big heart for real estate - and good connections.
Based on the deliberated PDDU (December 2008) – the urban direction of construction – through his deputies in a early morning marathon session, the way has now been opened to a skyscraper invasion on the seaside, buildings up to 18 floors! Don’t think about the ecological and urban results of such a policy!
And – of course – now it is time to get back good lands on the seaside – and the territory of Vila Brandão is one of the best in town. No place for poor people, no place for black people, no place for resistance in the center of the bourgeois dreams!
We’re talking about a total area of 17.000 m2 in Salvador’s top location – still not exactly defined.
Behind the story, there is a real estate fight between the mysterious construction company Marka and the Yachtclub about a piece of land of 360 m2 which became 2.200m2, after getting the construction license for an apart-hotel in the green area besides Vila Brandão, through the authorities…
An other company - ImoCom, portuguese multinational already involved in the Hotel-Hilton mega project in comercio, is claiming through the press the ownership of 17.000 m2, including the territory of Vila Brandão...
And, just by the way, a 3-4 years ago, Imocom still bought a resident’s house…and wanted to buy more!
The city council decides to expropriate – first of all: Vila Brandão, and a small piece of land of the Yachtclub.... to create public space...

Vila Brandão says no to expropriation!
The women of Vila Brandão have been active organizing a local action and an international solidarity campaign. The support of social movements in Salvador and of local lawyers permits to fight the expropriation-decree on a legal level.
The Vila is open to cultural events on sunday, some residents already met president Lula to give him the necessary information.
An international petition is online, signatures are urgently needed! Please help to spread it! 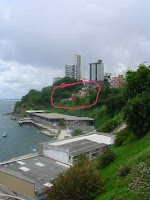 vila brandão is a 350 families community, existing since the 1940s. living in a – more or less - quiet way. Open to guests, a place of hospitality.

But aways involved in some kind of a fight...

• fishermen’s fight for free access to the sea – on the other side: the yachtclub
• residents fight for a childrens park – yachtclub, casa amarela are not enthusiastic...
• casa wildenberg – as torres – a real estate discussion bewteen investors, authorities, neighbours, priests and politicians, including the residents of vila brandão.

and now, all big fishes are in::
we’re talking about 11.000 m2 in salvador’s top location – a real estate fight between the misterious construction company Marka and the Yachtclub about a piece of land of 360 m2 which became 2.200m2 after getting the construction licence through the authorities... 40 years of „legal“occupation against a piece of paper with no legal qualification… the yachtclub wins in court … an other company coming into the play – ImoCom, portuguese multinational already involved in the Hotel-Hilton mega project in comercio, claiming 11.000 m2 as their own, including the territory of vila brandão, casa wildenberg and the yachtclub... Just a 3-4 years ago, Imocom bought a resident’s house… and wanted to buy more!
the city council decides to expropriate everybody – yachtclub and vila brandão... to create public space...
Strange, as most of the inhabitants already are paying IPTU for their houses - the local tax for landownership. Strange, as electricity, water, telefone are connected regularily to the inhabitants.
say no to totalitarian behaviour of politicians! no to real estate speculation in salvador! support vila brandão sign our petition here::

Sophia e Maya, duas dançarinas americanas ofereceram uma oficina de dança improvisada as meninas da vila brandão. Maya wrote:
" The class with the girls in the community was a great success! Everyone seemed to have a great time, we loved them all! We did ballet and a small routine, and then guided them to create their own movement to perform for eachother. Two mehninos also showed up but were to embarassed to join in. The girls were such a pleasure, thanks for organizing that."
fotos will come soon.
post by silvia jura Nenhum comentário: 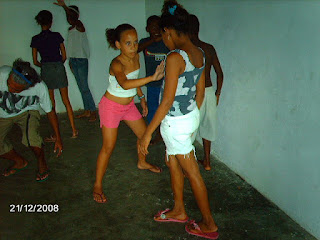 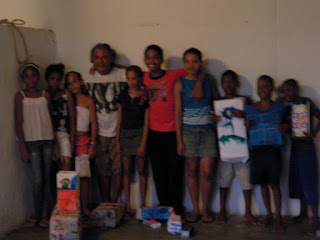 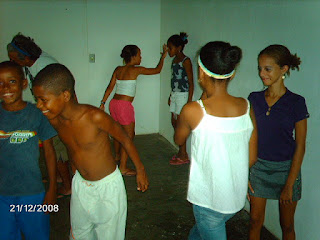 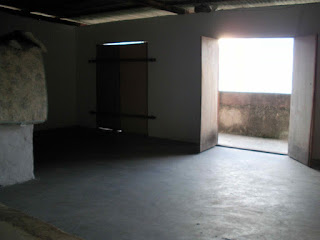 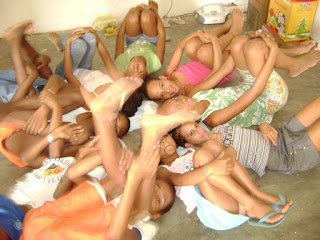 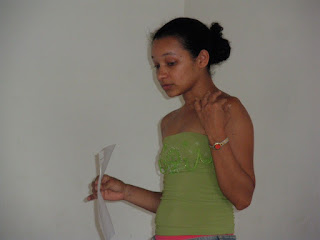 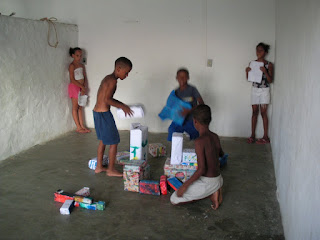 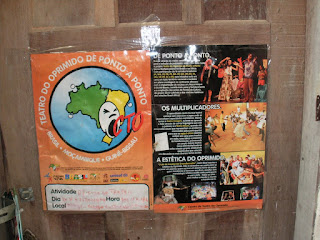 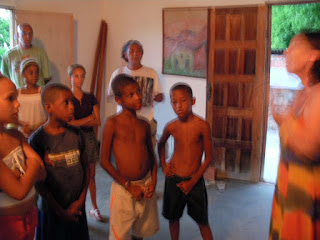 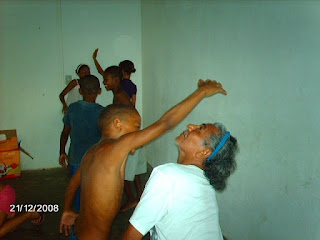 ps: I'm silvia, sometimes I live in vila brandão. it feels so good. and its hard. as well.
I'm the casa matria director, from the neighbour-house. Together with célia, we do the concept, connect the people... petruska is managing casa matria. and nancy is giving her house to make it possible.
*** Now I'm in austria, where it's pretty cold & grey.
post by silvia jura Nenhum comentário: