Very proudly, we should finally start presenting our residents: 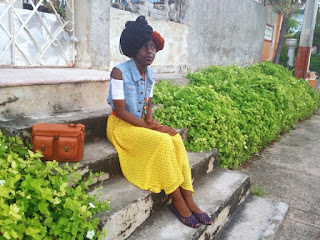 is a multi-media journalist from Zimbabwe, based in Canada, and currently living her best life in Brasil. Her work on the matter of black lives, intersectional feminism and musical musings have appeared in multiple publications including Vice, Rookie Mag, Noisey, The Fader, Torontoist and Shameless Mag. Toni Morrison is her idol, Michael Jackson her hero, and she navigates life constantly asking, “What would 90s Nia Long do in this situation?”

"As a journalist, I came to Brasil to document instances of racialized poverty, police violence and racism. While living in Vila Brandao, and being amongst the people I have heard and listened to their stories of oppression and survival. I have listened as they told me about the many ways they face systemic discrimination because they are poor and because they are black. It would not have been possible for me to hear these stories were it not for the accommodation I was offered by Silvia Jura and Celia Mara.
Casa Matria is an important social initiative as it helps foster conversations on race, power and privilege in Salvador. It is a microcosm that represents the power structures that exist in all parts of Brasilian life determined by economic wealth, access to education and healthcare.
What I have learned and seen in Vila Brandao will undoubtedly have an impact in the stories I write and the ways I choose to discuss anti-black racism and poverty on a global scale and its effects on black people. There are many similarities between the systemic oppression faced by people living in the townships of Soweto in South Africa, in inner city America cities and here in the favelas in Salvador, Bahia. Casa Matria has helped open my eyes to those oppressive links that come from years of racism and discrimination.
Casa Matria is a communal haven, based of a think tank structure that incorporates elements of social growth and equity in their works, to ensure that everyone can have access to a better quality of life. I will always appreciate everything I learned here and the role they have in the community, in a time of great unrest and inequality. "

Here a few links to her recent work

The political wall between my father and me / The Globe and Mail, Canada
How black history-month reminds me how exhausting it ist to be black / Vice
dear white people / Vice
tumblr.com
Qoshe


And we say: Thank you Tari!

We admire your courage, how you discover the world at your own pace. You are full of light and knowledge. Working all day long… and being in all our hearts!
post by silvia jura